Skip to content
Home » All Posts » New Horror Movies: History Begs To Be Revisited In ‘Last Night In Soho’ (Review) 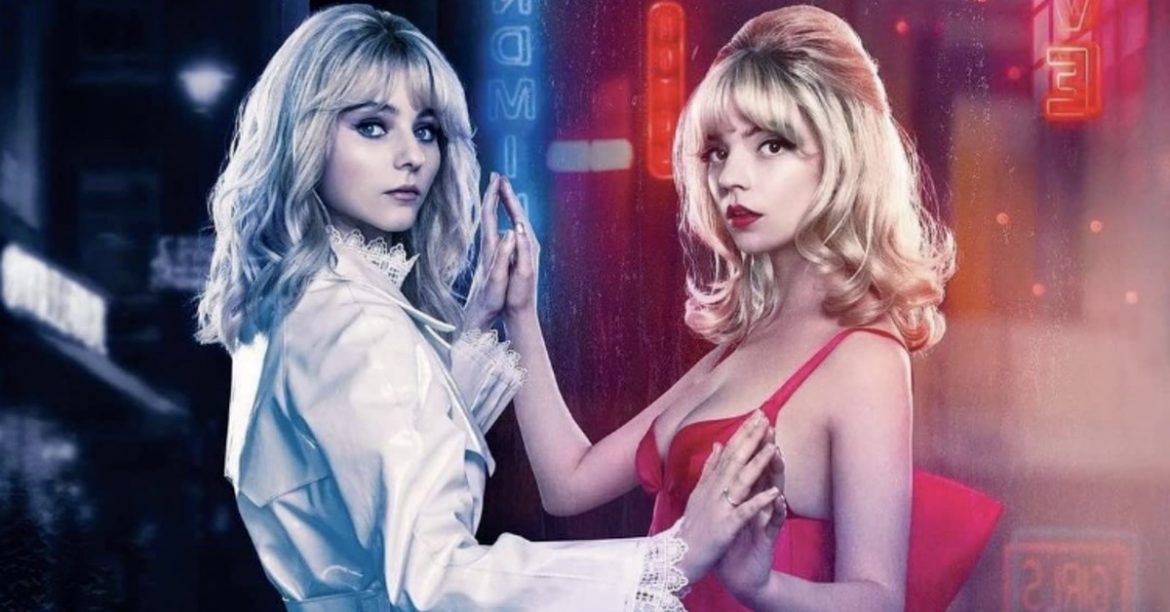 This year has given us a handful of quality horror movies to choose from, as far as mainstream productions go, but perhaps none as mesmerizing as Edgar Wright’s Last Night in Soho, a film that is both a period piece and a modern tale. Where mainstream horror movies of 2021 largely centered on slashers, which is not a complaint, Focus Features’ Last Night in Soho comes in as a breath of chilling fresh air with a psychological ghost story that feels part giallo, part Lynchian and part noir mystery, and it is currently streaming on all major VOD platforms. Reportedly inspired by Repulsion (1965) and Don’t Look Now (1973), the story still stands as a unique one. This feature embodies a few genres with horror certainly being one of them, though you won’t find any comedy here, unlike many of the director’s other films. Edgar Wright has successfully created an artistic masterpiece with Last Night in Soho, one of the most captivating and distinctive horror movies of 2021.

Plot: Eloise (McKenzie), an aspiring fashion designer, is mysteriously able to enter the 1960s where she encounters a dazzling wannabe singer, Sandie (Taylor-Joy). But the glamor is not all it appears to be and the dreams of the past start to crack and splinter into something darker.

Director: Edgar Wright, who has successfully created a film that separates him from his past comedic works, like Shaun of the Dead and The World’s End.

Writers: Edgar Wright and, because he actually seems to care for a woman’s voice to be heard in this compelling story, Krysty Wilson-Cairns (1917 screenwriter).

Rated: R, for the amazing use of strong language in a fun, Londoner way, and because of some stunning splatter.

WARNING: Below is a review and brief analysis of the film Last Night in Soho, which by nature will contain minor spoilers, most of which can be found the movie’s trailer or occurs in the first part of the film, but no major plot spoilers were revealed.

Objects in the Mirror May Appear

Our story opens with Eloise, or “Ellie,” who stays with her grandmother in the countryside of Cornwall. Ellie is wearing a ‘60s style shift dress made of newspaper, dancing to the tune of Peter and Gordon’s 1964 hit, A World Without Love. She frolics and dances about her room, which is covered in ‘60s pop culture, fashion designer materials, and style pieces. While daydreaming of the future, she looks in the mirror and announces herself as an award-winning designer. So, straight away, we understand that the young woman has a passion for fashion and the Swinging Sixties.

We see a photo of Ellie as a child next to her mother, and then her mom supernaturally appears in her mirror. Ellie is not surprised by this and even asks her, “It’s good news, isn’t it?” Her mom gives a grin and a very subtle nod. Her grandmother, Peggy (Tushingham), then arrives with the mail. It is good news, seemingly, because she received an acceptance letter to the London College of Fashion.

Ellie is elated and while she is happy for her granddaughter, Peggy is worried about her in London, fearing it was too much for Ellie’s mom who didn’t have Eloise’s supernatural gift. We learn just a scene or two later that Ellie’s mother was also a fashion designer and committed suicide. Peggy is also concerned about the burden Eloise’s mediumistic ability can have and that the city will be just too much for her to handle, but Ellie cutely states that she is scrappy and can take care of herself.

We can tell by Eloise’s behavior and the starry look in her eyes in this opening arrangement that she is a big dreamer with a dash of wonder, though she has clearly been through far too much to be described as naïve, regardless of the ignorance she has regarding the city and district she is moving to. The upbeat and pleasant tune of A World Without Love helps convey this happy beginning, and Wright’s use of music throughout the film is fantastic and assists in delivering a variety of moods in his storytelling. While Last Night in Soho starts out with a jubilant opening sequence, our young protagonist will soon be thrown into a world apropos to the title of the Peter and Gordon song.

Once Eloise arrives in London to stay on Charlotte Street, just north of Soho, she is swiftly greeted by a creeper of a cabbie. Ellie is aware of her surroundings, and while she presumably may not have a lot of experience on the mean streets, she does seem to have some street smarts. At the college (filmed at the University of the Arts in London), it doesn’t take long for her to feel like an outcast among her peers, despite having a brief and seemingly bonding moment with mean-girl and dorm roomie Jocasta (Karlsen) over both having deceased mothers.

Eloise decides it would be better if she stayed elsewhere and locates a room for rent right in Soho. Relieved that she has privacy, she tucks herself in for her first night in her new residence and the magic starts to happen: Eloise is transported away to a Soho in the middle of her favorite decade—the ‘60s! As seen in the trailer below, Ellie does not seem to be fully in her own body, or is at least connected to someone else in this era, the would-be singer Sandie.

Her first night in her blast from the past is one that anyone could hope for in visiting the debaucherously Swinging Sixties in London’s Soho: Eloise observes live music and happenings in clubs, a handsome stranger aiding her/Sandie in dealing with yet another creeper, which this area of London both past and present does not seem to have a shortage of, and she also experiences a moment of raw passion. She seems to experience this magical night sometimes in the form of Sandie and other times as a witness to Sandie’s comings and goings. It appears that when she is a bystander, she cannot be seen by others; she is a silent spectator with a front row seat in a moment in history.

Upon first viewing, it is not noticeably clear how this time portal or time travel thing works or if it’s either of those things at all; Last Night in Soho does not provide us with all the answers so obviously. As Eloise continues to revisit ‘60s Soho, she starts to see the darker side of Sandie’s happenings and the bleaker side of the district both modern and past. Sadly, Ellie is not able to feel safe in either time, leaving her feeling as an outsider no matter where she goes. The glitz and glamour of Soho seem to be dimming more and more.

It does not take long to be sucked into this story, and each time Ellie returns to her room, we wait with bated breath to see what is revealed in her visits to a bygone era. As the trailer reveals, Sandie and Ellie find themselves surrounded in danger, and Ellie deduces that she seems to be witnessing actions that have long played out, but the ghosts from Sandie’s past are catching up to the present.

As her journey unfolds, we can’t help but wonder if Ellie will come out of this alive or with her sanity intact and, if not, which period will end up breaking her. The Soho name of the London variety comes from an old hunting cry, a fitting description of both the ghosts of London’s past and the current-day dangers Ellie is trying to manage.

While the entire cast truly deserves applause, Thomasin McKenzie’s and Anya Taylor-Joy’s performances are breathtaking as the primary characters. Both actors have an exceptional ability to convey emotions that transcend the screen, allowing audiences to suspend their disbelief and get lost in a story that is very fanciful but still feels real.

There is tension throughout most of the film with some effective elements of suspense, but the real horror components and ghostly imagery are scarcely sprinkled, utilizing the ingredients wisely and allowing them to have greater impact. Wright provides most of the horror in a third act that will stick to your skin long after the credits roll with the film’s final song, Last Night in Soho by beat band Dave Dee, Dozy, Beaky, Mick & Tich (of which the movie was named after).

Like giallo horror, Last Night in Soho uses a cornucopia of fabulous shots of color to enhance moods, a focus on characters’ eyes, a utilization of cryptic camera angles, and it also has its fair share of splatter. This stylistic approach paired with unexplainable and bizarre happenings are ingredients that fans of Lynchian and Argento-esque horror movies will likely appreciate. There is more than meets the eye with this mystery and while it is a slow-burn tale, the fantastic art, well-crafted story, intriguing dialogue, and the film’s ability to get the audience rooting for both Eloise and Sandie prevent this feature from dragging.

Wright has successfully created a work of art that is rewatchable. This is not a film in which all the connotations are clear cut, giving the audience plenty to ponder. Anya Taylor-Joy’s first breakthrough was the 2015 horror film, The Witch, a period piece that stays with the viewer long after its viewing and has various interpretations, and she now stars in another horror film that’s part period piece which accomplishes similar results (but this one is far more colorful).

Like many avid fans, this writer loves a good popcorn watch, horror movies like Night of the Demons or The Babysitter, but deeper pieces are also appreciated and welcomed. As of late, many modern filmmakers claim their horror movies have profounder meanings than what’s just on the surface. However, they contradict that notion by hitting their audience over the head like a hammer with their not-so-subtle tones, and that is just fine, but they feel more like popcorn-flicks than meaningful pieces. Soho is not one of those films, with Wright delivering intellectual depth and rich emotion throughout. If you like your horror to also be thought-provoking and nuanced, where more than one viewing may be necessary to connect all the dots, then Last Night in Soho is for you.

On the surface, this feature certainly speaks on the societal oppressions of women and nostalgia over glamorizing the past, but the undertone is not as clear. Most viewers will likely find that there is plenty of symbolism, foreshadowing, and allegory to contemplate. For every signal that a connotation of the film is about one thing, we get another that seemingly suggests otherwise. The subtext can be perceived as a story about women empowerment and overcoming trauma, but a viewer could take home a less positive message, similar to how audiences are split on if the ending of The Exorcist is a happy or dreary one.

While the director has revealed some answers, like a good poem, many of the subtextual meanings of Last Night in Soho are, of course, subjective. Regardless of your takeaway, you will likely find yourself taken away by this story and its powerful climax. (Horror Movies Hub will likely release a spoiler-filled analysis to look at Last Night in Soho on a deeper level. Plus, we need to look at all the connections this film has to the James Bond world because that’s just fun.)

With intriguing dialogue, brilliant production and direction, a mysterious story that is both retro and fashion forward, and incredible performances by the entire cast, Last Night in Soho is one of the best horror movies of 2021.