Skip to content
Home » All Posts » New Horror Movies: ‘The Last Matinee’ Projects A Murderous Night Out At The Cinema [Review] 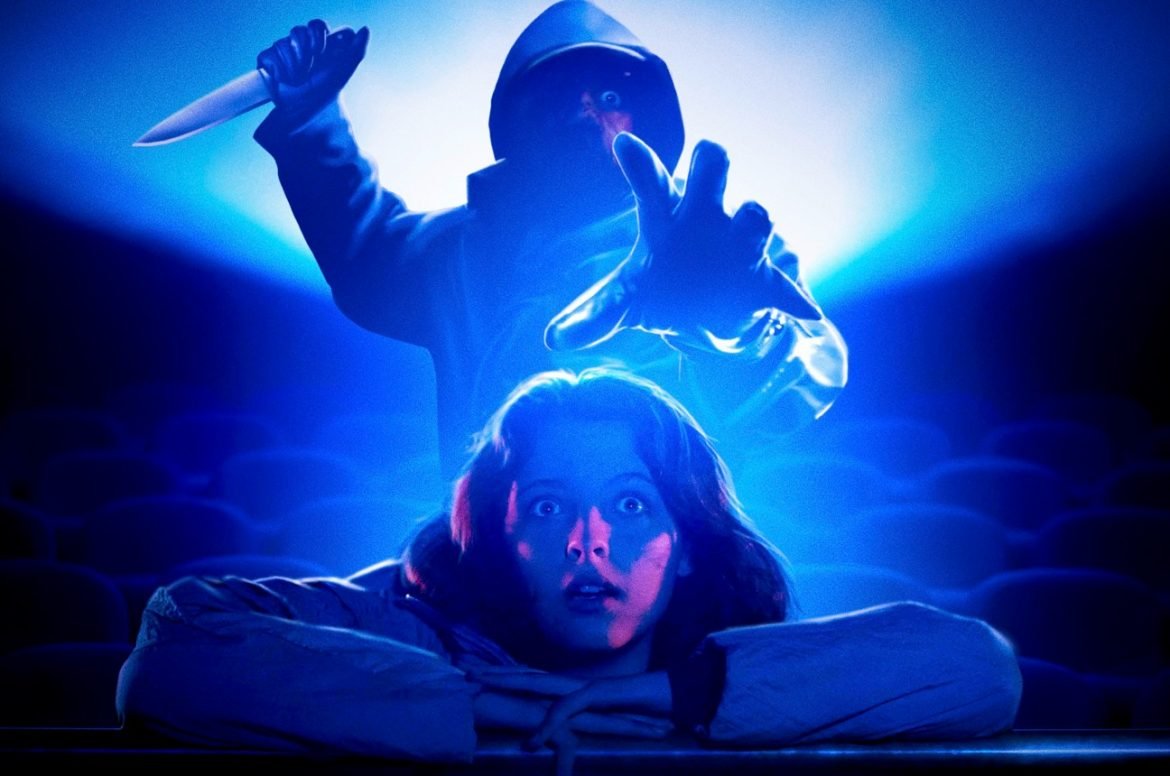 A trend revving up with horror movies is the neo-giallo, constituting films that call back to tones, eras, tropes, and overall ambiance present in classics directed by heavyweights like Dario Argento or Mario Bava. Horror movies that transport us to nostalgia, often soaked in neon and blood, is nothing new, but The Last Matinee by Uruguayan writer and director Maximiliano Contenti functions as both a love letter to the giallo and slasher genres and as a genuine entry side-by-side with the originals. Presenting itself as more than a reverent tribute, The Last Matinee is a tale of how magical and terrifying a night out at the cinema can easily be.

Plot: A cold, wet day. A declining cinema. All you want is to get out of the rain and watch a good film. But who else is in there, hiding in the dark? When Ana takes over projection duties from her ailing father, she doesn’t expect anything worse than a broken reel or burned-out bulb. But there is a sadistic killer in the auditorium, and soon blood is running in the aisles.

Rating: NR as Satan intended all horror movies to be.

NO TALKING. NO TEXTING. NO BREATHING.

A heavy downpour supplies a doomed approach to the Opera Cinema, an actual theater that director Contenti grew up going to, as a raggedy car arrives and the driver slides on the requisite black gloves and long coat of the giallo slasher, preparing to go to work. Soon, we are introduced to the other denizens of this late-night screening, and the film does an aplomb job of letting us get to know them deftly. Even if we don’t learn about their lives, we get a good feel of them, and in a genre where characters are often surface-level fodder, it is welcomed.

Our main protagonist is Ana, daughter of the projectionist who’s sent her father home as she’s looking for an easy place to study for the evening and is more than capable of running this old ‘90s era rig herself. From her projection booth she can survey the labyrinthian thousand-seater theater below, with its small smattering of viewers; an awkward date, drunken teenagers, a small child having snuck into an R-rated movie. Each oblivious in the oppressive darkness that a cloaked figure is slowly sizing up his prey.

A brilliant setup calling to mind a film like Demons in setting, but a stronger connection to the films of Brian DePalma in look and table-setting of scenes. This is high praise to heap upon Contenti and cinematographer Benjamin Silva, but it is more than deserving, and what helps The Last Matinee break from simple homage created to remind you of other movies to something that stands on its own two feet.

The theater itself is a character, large and imposing but authentic and lived in. It highlights how you never know what is happening around you once those lights go out and your attention is grabbed to the screen. Nothing captures this better than the first kill of the film, as we are focused on the kid caught up in the forbidden picture in front of him, to the point that we, the audience, barely notice the killer across the aisle. Out of focus, we know he is doing something to an old man seated by himself, but Contenti keeps our attention not on the kill but the fact we could be enjoying our popcorn and have no idea something so horrific is happening feet away.

While that kill might be out of focus, the rest offer some up close and personal yet subdued gore-fests. The killer gets a little arty with it at times, having some fun beyond the spoilerific reason he takes lives. A favorite is the throat slashing of a smoker mid-puff, with our gloved killer pulling the victim’s head back and letting all that smoke billow out of the now opened esophagus.

One of the only downsides of the horror movie is an overall lack of these kills, which would have picked up the gas a little in the pacing department. The killer can disappear for too long of stretches and the film could use some tightening in that regard. At the same time, the melodic and deliberate pacing of The Last Matinee, never aiming for fast or intense, ensures we never enter schlock territory.

However, the time away from kills or seeing the murderer, while robbing the film of tension, does mean we have a reaction when characters unexpectedly die. Remove the killer, add some jokes with plot alterations and suddenly we have a ‘90s indie about people gathered in a theater late one night and making life decisions. It’s what’s so great about the nuts-and-bolts construction of the script and its use of characters, as we never know who’s going to make it because so many feel like headliners.

SETTLE YOURSELF IN FOR A RED SCREENING

Conveying much more than a cut and dry veneration of classic horror movies, The Last Matinee fits nicely into a genre this reviewer calls Paperback Horror. Something with a great cover, impressive premise, plenty of love and inspiration culled from a mutual wistfulness to filmmaking out of the past, but also something new, with its own artistry and construction. Arguably, Maximiliano Contenti made the new poster child for this little subgenre, gifting us a knockout new horror flick and a goodbye to a theater experience we fondly remember from youth.

The Last Matinee becomes available on Arrow’s streaming service starting December 1st, along with a slew of new and old horror movies, so be sure to sign up and start your 30-day free trial. In addition, The Last Matinee is available to rent on VOD and in a sexy Blu-ray set from Vinegar Syndrome in the U.S. and Arrow in the U.K., a highly recommended inclusion to that big shelf of horror movies that all fans cherish, the fans that this film is designed to delight.