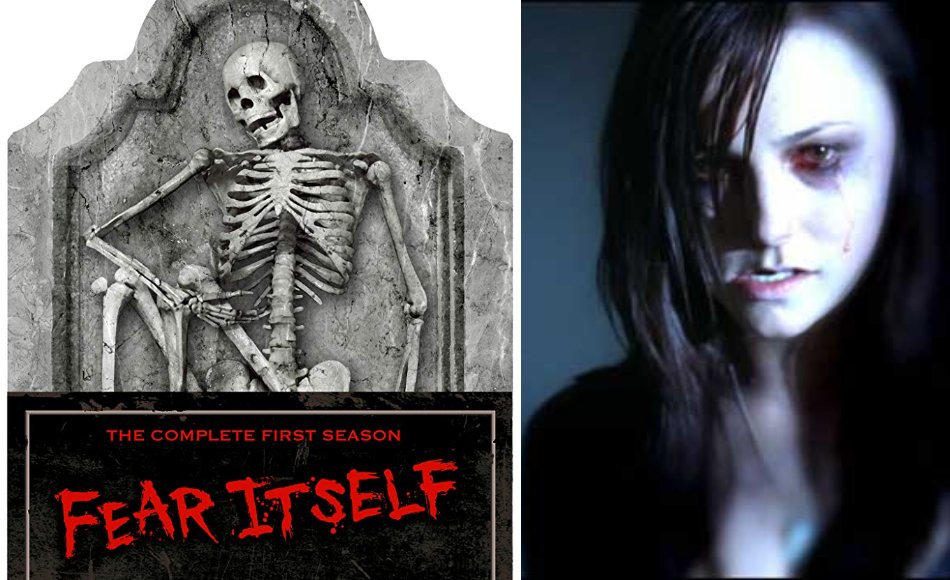 For hardcore gore-hounds, ghost-heads, monster-mashers and any other adjective laden descriptor of the horror community, the only go-to New Year’s horror movies tend to be New Year’s Evil and Terror Train/Bloody New Year. Rosemary’s Baby could also be counted in the horror movies category of New Year’s terror, if you squint really hard, along with a few other outliers. But way back in the far-flung year of 2008, a new contender for the ultra-exclusive sub-genre of New Year Horror entered the ring.

Ghosts, the Undead, Demons and Ghouls in Primetime

The horror anthology series Fear Itself premiered on NBC in July of 2008, running for—almost—one season. The network put it on hiatus to make way for the Olympics, but somewhere between the high dives and the pommel horses, the big peacock decided to give the ax to the fledgling horror series, leaving us with but a taste of what may have been.

Created by Mick Garris, Fear Itself was positioned as both the spiritual successor to Garris’ own Masters of Horror and as the safe-for-network-TV version. Unfortunately, network TV and horror, especially at that time, did not mix well, causing it to go the way of, well, most shows on NBC.

Featuring big-name directors and some genre-thriving actors, Fear Itself is a bit of a lost gem in the television horror landscape. Locked away in the DVD set are forgotten works by Stuart Gordon, Eduardo Rodriguez, Mary Harron, John Landis, Ronny Yu, Breck Eisner and more.

The series was incredibly experimental for that era of network television. Only a few years later would the likes of American Horror Story, The Walking Dead and a myriad of other horror adjacent shows come to dominate the primetime cable world.

But as we reach the end of 2019 and begin dragging ourselves screaming into a new decade, it’s time to look back upon one specific entry in this shows short lifespan. While most New Year horror movies are all about slashers and satanic solstices, the episode of Fear Itself simply titled ‘New Year’s Day’ tackles a subject that had yet to be run into the ground: zombies.

Pop the Champagne—Just Make Sure to Aim for the Head

Directed by Darren Lynn Bousman (Saw II-V, Repo! The Genetic Opera, Devil’s Carnival), ‘New Year’s Day’ is based upon a short story by Paul Kane and adapted into a teleplay by Ben Sokolowski (Arrow) and the legendary maestro of the comic book macabre himself, Steve Niles (30 Days of Night, Batman: Gotham County Line, Frankenstein Alive! Alive!).

Briana Evigan (From Dusk Till Dawn: The Series) plays Helen, a young woman who finds herself awakening in the wee hours of January 1st with a hangover to end all hangovers. Wobbly and pukey, she tries to make sense of the cacophony of helicopters and police sirens coming from outside her window. It seems Helen has found herself smack dab inside one of the best horror gimmicks of all time, one that actually takes advantage of the New Year setting in more ways than one.

Many have awoken on New Year’s Day with barely a memory of the night before, so why not add in the caveat that you also don’t remember the apocalypse started the moment the ball dropped?

As Helen realizes all is not right, she begins a long fight for her life journey from her apartment to her boyfriend’s across town, all the while her memory of the previous evening’s events slowly piece themselves back together again.

In a post The Hangover world, you more-or-less expect a gimmick like this to be played for Shaun of The Dead-type humor. Thankfully, much like the rest of Fear Itself, Bousman and Niles bring it with the suspense, atmosphere and EC Comic ingenuity for a tale quite unique unto itself. The fact it manages to do this while within the most overwrought subgenre of them all—the zombie film—is impressive.

Bousman gives the proceedings a cinematic quality and potent visual flair, ensuring the locations all have their own creepy personality, despite how sparse and limited they are. Due to its low budget, we never truly see Helen making her way on foot through a zombie ravaged city, instead, the story makes use of parking garages, dark alleys, abandoned buildings and other assorted areas.

But it never feels like it’s holding anything back, perhaps due to each set piece being utilized to such a great extent or well-timed flashbacks to earlier in the night keep the horror from getting stale. It’s the flashbacks that paint a picture of who Helen is as she has no time in the present to take a breather and expel exposition.

Interpersonal drama paints the night before as our heroine is revealed to be drifting aimlessly after the death of her brother and forced to attend a New Year’s party by her roommate, with seemingly no one grasping the depression she’s wrestling with. Slowly, the pieces of a larger puzzle begin to form as we learn that before the world crumbled, Helen’s personal world crumbled around her.

Smartly, Niles, who more than anyone knows what a good zombie story needs, peppers the script with subtle allegory. Personal catastrophes of one bad night can truly feel world ending, so waking up with the world truly gone works as a brilliant extension of the emotional turmoil Helen feels. Zombies themselves can be seen as a stand-in for those closest to her now feeling different, alien and perhaps even hostile.

As past and present come to a head, the episode climaxes with a shockingly morbid finale but also manages to sneak in one little bit of dark humor before fade out to ensure you leave with a smile and applause, giving a whole new meaning to “New Year, New You.”

Scream at the Stroke of Midnight

Backed up with killer camera work, new twists on the genre, expert pacing and tight writing, ‘New Year’s Day’ exemplifies that Fear Itself could have been a juggernaut in the world of anthology horror that we’re only really tapping back into now with Shudder’s Creepshow series. Now it exists as but a hard-to-find treasure in the deepest corners of the discount bin, on occasion making its way to streaming services before disappearing again like a Monkey’s Paw vendor.

So, if you’re in need of something different to throw on for your New Year’s party, ring in new beginnings with the ‘New Year’s Day’ episode of Fear Itself. This short horror film is the perfect backdrop to your midnight countdown and will entertain you far more than any crappy pop star lip-syncing in Times Square will.

From The Hub That Drips Blood, Auld Lang Syne, everybody!