Skip to content
Home » All Posts » Holiday Horror Movies: ‘Krampus’ and the Hell of Tradition 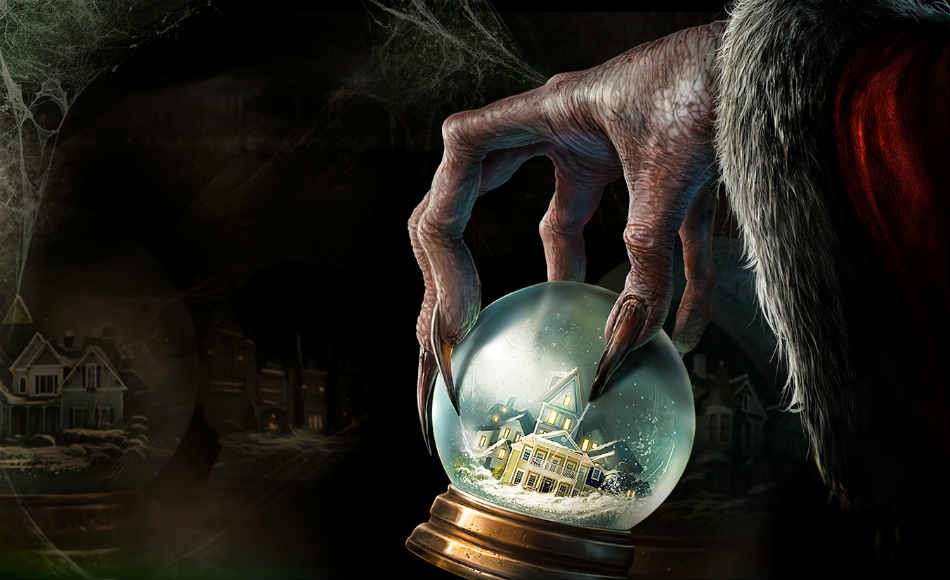 A shortage of Christmas horror movies there is not. There is also no shortage of horror movies starring the one and only Shadow of Saint Nick himself, Krampus. Only one Holiday Goatman headliner has truly been great though, and while Michael Dougherty’s Krampus could have settled for just being a killer creature feature, it also comes loaded for bear with commentary about the season and how we all view it.

Plot: When his dysfunctional family clashes over the holidays, young Max (Emjay Anthony) is disillusioned and turns his back on Christmas. Little does he know, this lack of festive spirit has unleashed the wrath of Krampus, a demonic force of ancient evil intent on punishing nonbelievers. All hell breaks loose as beloved holiday icons take on a monstrous life of their own, laying siege to the fractured family’s home and forcing them to fight for each other if they hope to survive.

Fair Warning: We’re getting right into the ending of the horror film, here. If you have not seen this holiday horror masterpiece, pour some hot chocolate, pop in the Blu-ray and then come back.

JINGLE ALL THE WAY TO HELL, KIDS

Much hoopla has been made over the closing moments of the film, as at first, it seems that Max has gotten his wish. A cheesy tune plays as the family shares laughter and all the strife they shared melts away into the perfect morning. Maybe it was all a dream and Max being dropped into the pit of hell was the crescendo before reality slapped him back.

But then Max finds Krampus’ bell, a parting gift. The events of the film faintly echo as his family all give ashamed and grim expressions. Their home has been placed within a snow globe in Krampus’ workshop, amongst a collection of other hapless households who found themselves on the wrong end of the demon’s rattling chains.

A personal takeaway upon initial viewing was that they were trapped in a Hell of Max’s own making, the perfect Christmas to be played over and over for all eternity. Dark as pitch, yes, but perfectly in spirit with the film’s themes. Max gets his wish and the reality of his wish is pure suffering through wholesomeness.

Michael Dougherty himself has called this perhaps too cynical but mostly chooses to keep the meaning to interpretation. Vague as he is, he has implied that Krampus is more or less keeping watch over the family to ensure they toe the line or else he’ll come down the chimney once again.

What’s interesting about these two interpretations, and a few others that have cropped up, is how the end result remains practically the same once you dive deep. Max’s wish equals suffering.

This horror movie is very much about the breakdown of tradition and nostalgia versus reality. It’s about commercialization overtaking Christmas to the point that it’s unrecognizable and just a beast that we all must endure every year and conquer, like Hercules fighting the damn Hydra.

Many people look back onto Christmas from years gone by very differently than it is now. No, this isn’t going to turn into a rant about how society has fallen or changed as that’s a bunch of bull hockey. What has changed is the scale, expectation and what people are willing to put up with.

NOT A CREATURE WAS STIRRING, EXCEPT CAPITALISM

The nuclear family went nuclear long ago and that is more or less the Christmas that is advertised to us. Small scale, all huddled around doing little activities together. Many of us remember doing just that, slowing down to enjoy the season, watch Holiday movies and play. All through a child’s red-tinted view of what’s going on, of course.

Familial tradition has progressively changed since the American Christmas first came into prominence in the early 1900s. It has morphed into, well, obligation. Big families acting as tribes is more and more a thing of the past, as nowadays we tend to splinter off, build our own out of friends and just the relatives we actually enjoy.

Society has slowly begun to un-brainwash itself from the notion we must all gather, regardless of whether or not we want to be together or even like each other, on this specific holiday while wearing sweaters all because the Coca-Cola commercial tells us we’re supposed to.

Krampus exemplifies this feeling, being maybe the most realistic Christmas movie ever made. From the mad dash of Black Friday, everyone finding preparations to be a hassle, Max’s plea to just watch Charlie Brown while wrapping gifts together, and the tension-filled dinner. This is modern Christmas for better or worse.

But this is not a straightforward appeal from Dougherty for us to return to the reason for the season with some family togetherness message of holiday hokum. It’s a horror movie and horror movies operate as allegorical tales far differently than the likes of Dickens or the average Santa Claus flick which have dominated the artistic interpretation around Christmas.

Through the course of the horror film, all the trappings of forced upon obligation and tradition are stripped away by the ultimate equalizer… fear. It’s through fear that all the crap of their lives goes away and they come together as just people.

They slow down and spend time with one another, even sharing some hot chocolate and watching a Christmas special. They just happen to be huddling in fear of a monster. But is the monster Krampus or a much larger, ages-old creature?

The beast that is Commercial Christmas with its artificial tenderness is the monster trying to tear them apart. It is twisted versions of holiday hallmarks such as gingerbread men, toys and even decorations that are the threat. Christmas is the villain and Krampus literally wears the face of its figurehead as a gruesome, mocking mask.

Which is where we get to the ending and its various interpretations. They’ve gone through this event; they’ve come closer and learned to appreciate one another in a truly honest way. Differences stop and even common ground is found.

They are given a gift by Krampus, a perfect Christmas per Max’s wish. They all get to be happy with a childhood warm and fuzzy memory of what that morning should be—at least according to television. Each one of them has grown, learning to appreciate each other in new ways, but…

We can’t go back. They’re all the same people no matter what and as the echoes of the film remind us, everything they did still remains. A holiday is not a real solution to problems.

Much in the same way you can’t pretend that Santa is real forever and go back to your childhood, Max has to grow up. We all have to grow up. We can’t be 10 years old on Christmas morning forever and that magical feeling won’t last into adulthood.

So be it eternal Hell or Krampus keeping a watchful eye, the outcome remains: forced into the traditional nostalgic ideal of Christmas, right out of a greeting card. But the truth, their actions, their feelings for one another, is ultimately still there.

Look at Omi’s flashback when Krampus comes to take her village and family. It’s dark and awful and only leaves her in more despair than when she threw down her hopes and dreams for a normal Christmas. The backdrop of this is a fighting family, an impoverished and starving village, and a people on the brink of collapse.

Of course, a child would believe the magic of Christmas will swoop in and bring everybody together. But you can’t force that, not in the way a child wants, not in the way commercialization and pop culture has taught us about the so-called magic of Christmas. It’s childhood naivety to think otherwise, and Krampus is the enforcer of that spirit, bringing it down upon you like a hammer.

It’s painful to grow up and let go of the nostalgia we hold so dearly. However, much like Max, we must grow past it. Otherwise, we repeat tradition like a drug addict, until we’re the family at the beginning of the film that’s forced together by an arbitrary date and not actually stopping to just plain talk to one another until they’re being picked off by elves.

Ultimately, Krampus is the perfect Christmas movie because it wants us to remove the tinseled veneer of the holiday. Throw out your garland, screw gifts, turn off the carols, and don’t you dare rock a single jingle bell. No faux jolly cheer; find your real cheer.

Just be present. When you boil down Max’s torn up letter to Santa, all he wanted was for everyone to stop and be present, but god damn Yuletide tradition kept getting in the way.

Don’t let Christmas be the shackles around your wrists like the ones Krampus wears. The reason for the season is whatever the hell you want it to be. That’s the true meaning of Christmas. At least it is via a demonic goat that commands an army of gingerbread men and is known for his Gene-Simmons-like tongue.

Because of witty writing, genuine suspense, a solid cast and layered meanings, 2015’s Krampus remains one of the best horror movies for the Christmastime season.

Happy Holidays from your entrailed covered friends here at The Hub That Drips Blood.