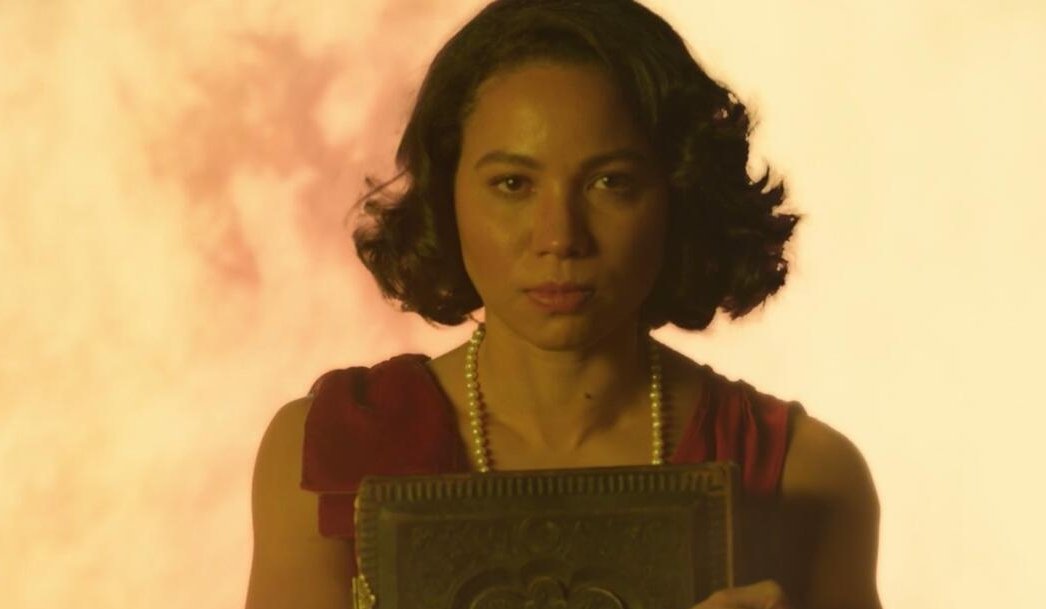 We are diving into shocks and frights again this week with the exciting horror series, Lovecraft Country. Today’s horror series recap covers Episode Nine: “Rewind 1921,” a chilling throwback to the Tulsa riots of Oklahoma. With the season finale of Lovecraft Country right around the corner, it will be interesting to see what the horror series has in store for us with “Rewind 1921.” The episode opens with Tic, Montrose and Leti frantically yelling over each other about the right course of action to help Dee. Dee’s left arm has petrified since we last saw her, and maggots and flies persist in emerging from her skin, how lovely. For a moment, we see the toll the curse has taken on her; her hair has puffed up into a nappy mess, the same as the twins, and her face is painted over with red lipstick. Could this be what the curse’s result will be? When the group call on Christina’s diagnosis, she informs them that Dee will need blood of the family in order for her cure to work.

Across town, William (Or Christina) happens upon the office of Officer Lancaster as he and his subordinates attempt to repair him from the previous night’s carnage. Lancaster has entire hides of black skin sewed on to him, now far more visible and telling than previous episodes. Though they have attached more black skin to him, the wounds seem to persist and pop through his flesh. William comments that this is likely the last time Lancaster can keep cheating death with the skin of abducted black people. He begs Christina to assist him, but she only watches through the eyes of William as the life slowly leaves Lancaster and he exhales his final breathe. For Christina this is closing the page on her proverbial chapter though one must wonder what the next chapter will entail.

Back at the shop, Montrose debates on drinking from a jar of moonshine before Tic arrives and takes a few swigs from him. Since they need blood of the family, Tic believes Montrose is a suitable candidate given that he’s the family matriarch, but Montrose says he can’t because George may have been Tic’s real father. This sets Tic off on yet another fit of rage as he confesses that he always wished that George could be his father, and as fate would have it, he may have been. The reveal is sobering if not infuriating as one can finally understand Tic’s indifference at the village that raised him.

While they dish about the topic a battered Hippolyta storms through the front door to everyone’s surprise. Hippolyta’s hair is unkempt, and she seems like she’s been zooming through one too many galaxies on her way back to this version of Earth. She quickly puts the group to work on information and finding a solution to the issue, deducing that that Tic, Leti and Montrose need to travel back to Tulsa, Oklahoma to retrieve the Book of Names from Tic’s grandmother. This premise unifies all the sagas of previous episodes beautifully and the next hour is the most concise the series has been thus far.

Back to the Past (Again)

The gang travels back to the observatory where Tic reminds Hippolyta that the time machine was sabotaged when she missed one of the officers and hit the machine in a previous episode. She is undeterred and coaches Tic through rewiring the machine, using herself as the machine’s broken motherboard with her new sci-fi purple strips. It is worth mentioning that Hippolyta is becoming the literal, not figurative, motherboard here to save her daughter. She plugs the machines wires into her arms and the quest is on!

Tulsa is as beautiful as we could possibly hope for amid the actual riots that saw the devastation and deaths of some 300 African Americans, reportedly. At this time, Tulsa had a bustling population of 10,000 residents with an exceptionally large epicenter of black trade and commerce occurring right along Greenwood avenue, aptly named Black Wallstreet. If 300 bodies sound like a low number out of a populace of 10,000, then you are not alone in your suspicions of the actual information provided.

Young black men and women stride with pride and beautiful smiles on their faces as the city’s architecture is showcased before its destruction. Montrose overhears young schoolgirls reminisce about the Tulsa high schools’ prom being cancelled. Suddenly, his eyes widen as he realizes from old rumors and stories about the event that this cancelling was a preface to the riots, which should begin in just a few hours.

What makes this episode so emotionally gripping is that since this is a time travel episode, no one can interfere or change anything that they see as it may disrupt history and their present timeline. This is particularly challenging for Montrose as they witness various memories of abuse by his father that truly shine a light on Montrose’s development. Amid harboring homosexual tendencies, Montrose grew up in a community that clearly did not care to deliver him from his trauma, so it makes sense that he maintains so much anger without totally exploding. For him, marrying Hippolyta and fostering a child was the sensible thing to do in a time when family was not oft rewarded to black families.

Meanwhile, Leti is wandering quietly through Tulsa when suddenly a truck of white men arrives and rifle-butt a black man to the ground. She immediately races down the street as gunfire graze past her face. Christina’s invulnerability spell is still in affect and blunt impact of the bullets causes her to fall onto a lawn. Luckily, the house she falls in front of is Montrose’s and George’s old home, and their father meets the gunfire with shotgun shells of his own. After getting Leti inside, we are introduced to Nana Hattie (Portrayed by Regina Taylor of A Family Thing), Atticus’ grandmother. It is not without irony that Leti is able to meet and interact with Hattie while Tic is not able to. Hattie is suspicious of Leti as she does not recognize her clothing or her shoes, to which Leti confesses her dealings. At first, Hattie does not admit to knowing where any Book of Names are but gives in when Leti confesses to being pregnant with Hattie’s great grandson.

Tic follows a drunken Montrose, who up until now has been wandering for hours without Tic or Leti. Montrose’s best friend Thomas came out to him, but Montrose denied him sovereignty by saying they could no longer be friends.  Fifteen minutes later, Thomas is shot in the head by white rioters. Montrose is as helpless to stop this event from happening tonight as he was back then, but he learns quickly that it is not his inaction he should be focused on. Tic reminds Montrose that though we want badly to amend and fix the problems and past traumatic events in our lives, those events are what shape and mold us into the people we are. As Hippolyta would say, it is a constant stretch of time in the one direction we all do not want to go. Even though she had the choice of travelling to whatever pocket of the universe she wanted, she was not allowed to reverse time or fix mistakes. Montrose watches with tears in his eyes as once again Thomas is shot in the head.

Where Is Your Fire?

Back at Hatties place, she has let go of the pleasant vibes when she catches Leti rummaging through one of the rooms. Armed with a gun, Hattie questions Leti’s clothing and shoes as they are out of date, prompting Leti to confess about her time travelling. Hattie’s expression goes blank as she walks over to a portrait on the wall and pulls back the cover revealing a large, old book. Hattie trusts Leti in this moment, saying that “when this child is born, he will be my faith turned to flesh.” Soon, the entire room is engulfed in flames and the screams and cries of little children and women are heard from behind the smoldering door. Leti looks on in terror at Hattie as the fire slowly begins to consume and engulf her.

Series composer Laura Karpman unifies the tone perfectly with what they refer to as a ‘requiem’, in the form of the poem “Catch the Fire”, by Sonia Sanchez. Though the scene is silent the viewer can infer that Hattie yelps in terror and fear as fire engulfs her person, yet she does not flail or run in pain. She stands perfectly in place in a form of solidarity to say that she will not fear her final moments and she will not scream when her sacrifice will bring so much rejuvenating light to her family’s name. Leti grips her hand and balls in tears as Hattie crumbles to the floor until she is nothing but a pile of flame and ash. Outside, Leti slowly walks with the book clutched tightly to her chest.

Hippolyta gurgles a white alien fluid from the mouth as electricity charges through her arms. The machine’s power is weaning, and it is taken its toll on her. Tic has managed to jump back to check on her while Montrose waits for Leti’s return at the gate’s entrance. Hippolyta screams in pain as she slowly levitates above Tic. He watches in awe, cheering her along the way to not give up. Electricity courses and pops all over her skin as Hippolyta’s hair suddenly changes from black to blue! Her eyes glow a milky purple as the portal continues to click and shutter.

Montrose looks on at a ruined Tulsa with silent tears while the door continues to weakly flicker. In the distance he can see a traumatized Leti walking down the center of the street toward the building. A plane soars low as it drops pipe bombs on any stragglers. Fire and metal flicker and fly across the screen as she walks through the flames undeterred. One would be furious with her pacing here if not for her holding another human’s hand as she burned to death. The shot is eerily similar to Hanna’s escape from Braithwhite manor and serves as a healthy comparison between generations to signify that Tic’s family will carry on the magic of the Braithwhite name.

Hippolyta is convulsing and spouting white liquid everywhere as the observatory seems to be filling with smoke. In the background, the time machine has whirred and begun to overheat, causing the room to fog up. Suddenly, Montrose and Leti are diving through the door as it just barely manages to close behind them. Leti clutches The Book of Names in her hands with care as Montrose heels over in exhaustion. Tic holds an exhausted Hippolyta in his arms while she asks, “Did we get it?”

“Rewind 1921” is a familiar trip back to what is arguably the most painful and bewildering moment in black history. While the pain is familiar, what is different here is that instead of drawing pain and sorrow from its roots, Lovecraft Country instead looks to solidarity and the everlasting light of rebirth and life of our future. The show can never truly rewind the clocks to redo or revisit our trauma. Instead, it views the trauma to experience it again and again until the audience realizes the wholeness of their true selves.

We are only one episode away from the horror series finale, so join us next time for the last installment of our Lovecraft Series Season One recap.