Skip to content
Home » All Posts » Horror Movies Get Hypnotized By ‘Luz,’ A Demonically Daring Experiment in Cinema 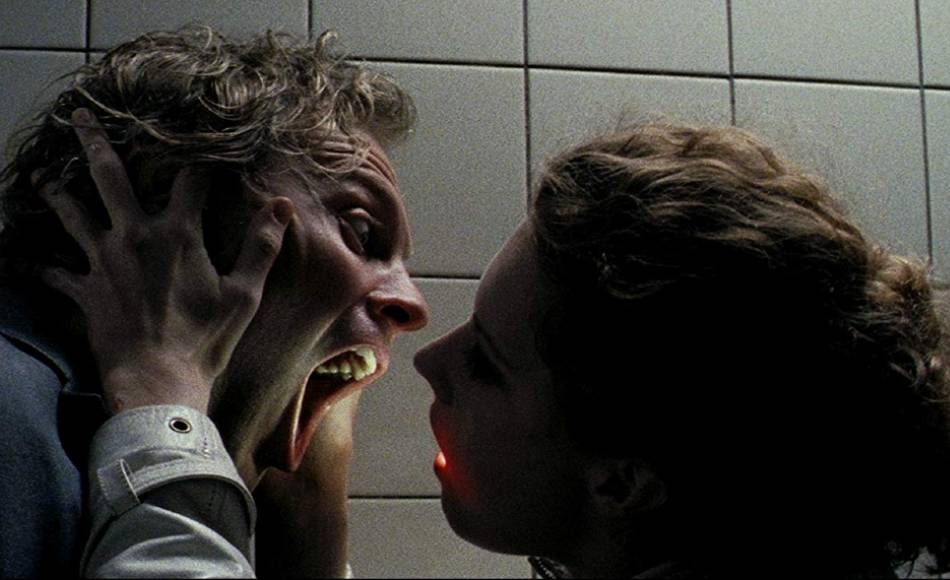 The definition of art is as complicated as it is vast, with horror movies sliding right into that complication with breathless aplomb, creating experiences that operate on levels only understood by the deep subconscious. It’s with that in mind that buffs of ‘80s Italian horror movies may have the easiest time wrapping their brains around Tilman Singer’s debut feature, the German-Spanish made Luz. But for those not accustomed to those strange, dream-like stories, Luz is still a ride that should definitely be taken at least once.

Plot: Fleeing from the grasp of a possessed woman, a distressed cabdriver begins a confession in a rundown police station that endangers everyone who crosses her path.

A SLICE OF CELLULOID STRANGENESS THAT ENSNARES ALL WHO WATCH

Beginning life as a 30-minute student thesis film, Luz quickly morphed into a lean and mean 70-minute feature for the festival circuit. But what sets it apart is that it is still, at the end of the day, a student film. A writer-director and a whole production team feeling out their use of the medium and how they approach art and story.

Never is that more apparent than in the middle section of the film, the true meat, where an interrogation via hypnosis plays out. Layers of reality intersect and fold in on one another as the titular Luz is taken back into the night’s previous events, and an interview room becomes her taxi. Sounds of the road, her radio, and conversations with pedestrians compound along with an assistant translating her Spanish speaking into German.

It’s a sensorial treat rarely seen on film and a true use of cinematic language. Singer approaches the picture first asking, “Why is this on film? What makes this different than prose, comics, theater or audio?” There’s something exciting about watching an artist search around and discover how they wish to tell a story while trying to stand out among classmates, using all their influences and interests.

The movie is Shot on 16mm and has a grainy visceral essence that both makes it a throwback to old school Giallo cinema but also rewards it with this dank unreality; dream-state that places you in the mind of those experiencing this supernatural impossibility, specifically in Luz’s mind, a woman drifting trance-like through the evening while being stalked by something beyond reason.

Much of the “Huh?” of the movie can be chalked up to both expressionistic storytelling and the presence of a demonic bodiless entity moving through the proceedings, controlling events. Of course, we don’t understand what it’s doing or how it operates or what the purpose of its machinations even are—by definition, it is beyond our comprehension and so the laws of “normal” are tossed out.

We’re only truly left with one audience surrogate character, Olarte, the translator and assistant, who has no Goddamn idea what’s happening. That sort of self-awareness for the confusion of the film is refreshing and reassures you that the filmmaker is aware that, yes, things are usually supposed to make more sense than this but to trust him.

A TRANSCENDENTAL SUCCUBUS WALKS INTO A BAR…

The sets and characters are sparse but never make the movie feel restrained. An interrogation room becomes a busy street corner through sound and performance, a bar becomes a strange otherworldly meeting place. The audience becomes hypnotized as much as Luz is, and while that sort of statement is often hyperbole, it’s very much apparent as you are incapable of moving your eyes away from the screen and you feel yourself within the set along with the characters.

It seems the demon creeping within the film has you, too.

The highlights of the avant-garde horror picture don’t stop with cinematography and design, as the performances are top-notch, as well. Jan Bluthardt and Julia Riedler stand out the most, and in an ironic twist, it could be argued they’re inhabiting the same role.

Bluthardt brings to mind Klaus Kinski in this turn, and his ferocity to go for whatever the role calls for is apparent. His figure and piercing eyes can be terrifying, and one moment that he appears through smoke, tossing chairs aside, in full control of an entire room, is bone-chilling.

Riedler is equalizing mesmerizing, taking hold of the scenery as if it’s a one-woman show, delivering fast-paced dialogue and constantly engaging you, always doing something, and feeling dangerous with only a stare into the camera, like a wild animal. It’s incredibly impressive and helps to keep the audience’s attention when they would otherwise drift.

AN ACID DRIP OF HALLUCINATORY HORROR

More functioning as an experimental art project than a horror film is honestly Luz’s greatest advantage. It’s different and it grows on you over time, sticking out in your head, possessing you. Is Luz good? A question one doesn’t often ask in the middle of a review, but the answer is actually kind of interesting: It may not matter.

Sure, mileage will vary and it’s a case-by-case basis; a Rorschach test of style and substance and weird, rendering you either in total love or speechless befuddlement. That said, it’s something that needs to be watched, particularly for fans of horror movies in the vein of The House by The Cemetery or The Beyond. Any Fulci movie, really.

Currently, you can find the imaginative horror film in Shudder’s library, Amazon Prime, Vudu and many other VOD outlets. But coming March 10, an all-region Blu-ray Special Edition from Altered Innocence is releasing! Featuring two more short films from the director and a roll-out poster, it’s definitely a must-have for fellow fans of the flick, and you can pre-order it now.

No matter what your personal final feelings are, what’s most worth taking away from Luz is that it’s a strong first showing from Singer, one that’s dripping with uniqueness, presenting the language of film through a parallax eye and throwing down a career mission statement out of the gate. Luz is an experience, a concept album burned onto 16mm. And much like we all drool with anticipation for the next batch of horror movies from Panos Cosmatos, what’s next for Tilman Singer is an equally strange and beautiful prospect.