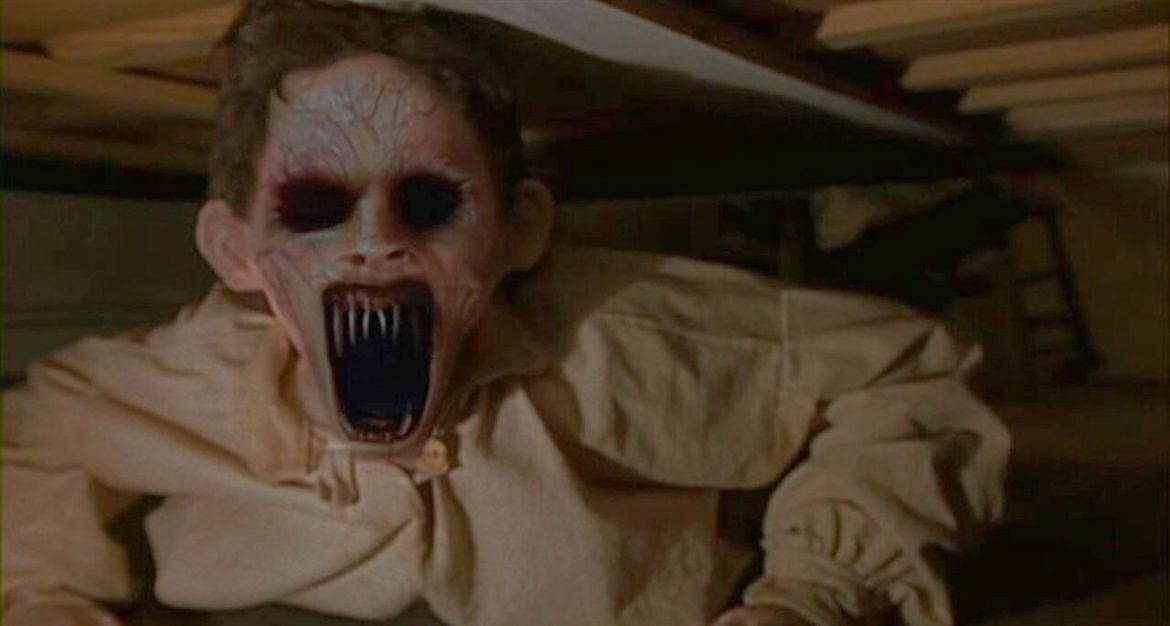 The Civil War and Frontier eras of American history hold a lot of potential as a setting for horror movies but mostly the settings have remained untapped, relegated to the kitschy or braindead. Perhaps it’s the fact horror movies tend to operate on the lower end of the money spectrum and the costuming and design needed for Historical pictures to look authentic pushes the boundaries. But one movie that does a wonderfully spooky job of fusing the Western and Horror genres is the debut feature from acclaimed screenwriter Simon Barrett and director Alex Turner, Dead Birds (2004).

Plot: A group of runaway Confederate soldiers who, with the help of an escaped slave and an Army nurse, stage a daring robbery at a bank holding a cache of rebel gold. The heist does not go smoothly, and they soon fall into in-fighting as they head toward Mexico with their stolen fortune. Needing a place to rest for the night, the criminals set up camp in a mansion overlooking an abandoned plantation, but it soon becomes obvious that the old house is not as empty as they thought, as a handful of angry ghosts make their presence known while the cohorts fight over the gold.

Rating: R because Confederates were, shockingly, not nice people.

Runtime: 91 minutes of old-timey bumping in the night.

Something is inherently perfect about the fusion between the historical and the terrifying, which is what makes it such a shame that more don’t try their hand at it. There’s also a dumb-founding simplicity to how certain horror tropes can be skewed in them. For instance, when the characters first encounter a strange hairless creature upon stepping foot onto the Plantation that will be the setting for their nightmarish night, they shrug it off as a shaved animal and don’t bother looking into it further.

Modern settings would require either the characters being unbelievably stupid or additional investigating, but there’s something to be said about the notions we have for the past, the intelligence of certain types, plus the great unknown of the land. The point is historical periods afford a horror movie with a thinner divide between the supernatural and the natural. To top it off, is anything spookier than a creaky house in the middle of nowhere lit only by lanterns?

For the niche number of folks who’ve watched the film, the title Dead Birds raises a lot of questions as to the meaning—if any—it holds to the narrative. Are the motley crew of deserters and thieves holding up in this doomed and abandoned plantation the dead birds of the title? Is it referring to the one they pass as they enter the home, being a stand-in for a blood sacrifice?

Hell, it may be calling back to an old documentary of the same title and some of the themes within it. Difficult to say, but the personal takeaway is the dead birds of the title are referring to the canary in the coal mine concept, symbolized by that dead fowl. This land is purgatory, the cornfield a River Styx where the damned and murderous gang enter, dead as soon as they cross the threshold, making their way to a house that has no visible pathway to and from.

The deadly sin of greed leads them there, and greed pulls in the home’s next batch of victims like a mythological siren song. This is a place of dead things, and slowly it poisons you, changing you into a demon of your own making. While the paranoia of their greed may call back to classic horror movies like The Thing, it’s the kismet nature of the habitation they find themselves in, with all its torturous perdition, that more interestingly recalls Dante’s Divine Comedy.

SIGHS AND LAMENTATIONS AND CRIES ECHOED ACROSS THE STARLESS AIR

There’s a Lovecraftian horror going on, both in what has been unleashed upon this property and the way the mystery of what exactly happened here is peeled back. Shadows of the past and screaming specters tell the tale of how one man’s grief conjured something not of the Judeo-Christian variety of demons, but of something grander and more malicious outside the spectrum of reality, ready to consume us.

All it takes is blood to call them forth—gallons of it.

Punctuated with the backdrop of the barbarism, which is slavery and the wanton bloodshed of war, all the characters are cursed with touches of death before the film begins, each of them different shades of revolting.

It’s only Todd, the escaped slave, who holds any sort of honor and sense, merely going along to escape the country and gain freedom than being a true murderous vagabond like the rest. William, their leader, seems to hold some regret for the killing he’s caused but is too consumed with the horrors of the war to ruminate long on ideas of remorse, all that matters is the gold he’s stolen.

There’s no grand morality tale within Dead Birds; it is simply a story of man-made hell on earth giving way to actual hell on earth. An allegory that could apply to any war or any area of human suffering, but there’s something poignant about the Civil War setting, about the backstory of a despicable slave owner sacrificing what he views as his “property” and that cruel arrogance tearing a black hole in the fabric of sanity.

While the atmosphere is perfectly spooky, there’s some solid jump scares and fantastic practical effects, what makes Dead Birds stand out is the nihilism of its world and its horror.

PRIDE, AVARICE AND ENVY ARE THE TONGUES MEN KNOW AND HEED, A BABEL OF DESPAIR

But while on the subject of the atmosphere, something that should be highlighted is how good the film looks. With a shoe-string budget, it’s already impressive enough that the set design, costuming, and make-up are top-notch, but the cinematography and lighting create a unique and moody image that makes the film look far pricier than it is, holding its own with horror movies that were allotted a much higher budget . The kudos can go to a name you might be familiar with: Steve Yedlin.

At the time of Dead Birds, Yedlin would have been best known as the Director of Photography for Lucky McKee’s May, but a year after Dead Birds would see the release of Brick, a movie that would create a long working relationship with Rian Johnson. So, yes, Dead Birds is shot by the same DP who shot Star Wars: The Last Jedi and Knives Out.

… THENCE WE CAME FORTH TO REBEHOLD THE STARS

Featuring stellar performances by the likes of Henry Thomas, Michael Shannon, Isiah Washington and supported by a cast of both veteran character actors and newcomers alike, Dead Birds is secretly a prestigious little haunted house picture with a unique and rarely touched upon backdrop. Sure, the few CGI effects don’t mesh well, and some scares work better than others, but it makes up for such failings with mood dripping off the walls and a creeping pace that crawls up your skin.

Dead Birds can be found on VOD, Shudder, and it is currently streaming for free on Tubi. Unfortunately, Dead Birds has not released on Blu-ray, but a DVD can be found featuring some limited special features and two very good commentary tracks.

If you need a spooky night in and want a break from the usual haunted house pictures, Dead Birds might be one of the horror movies you’ve been searching for.