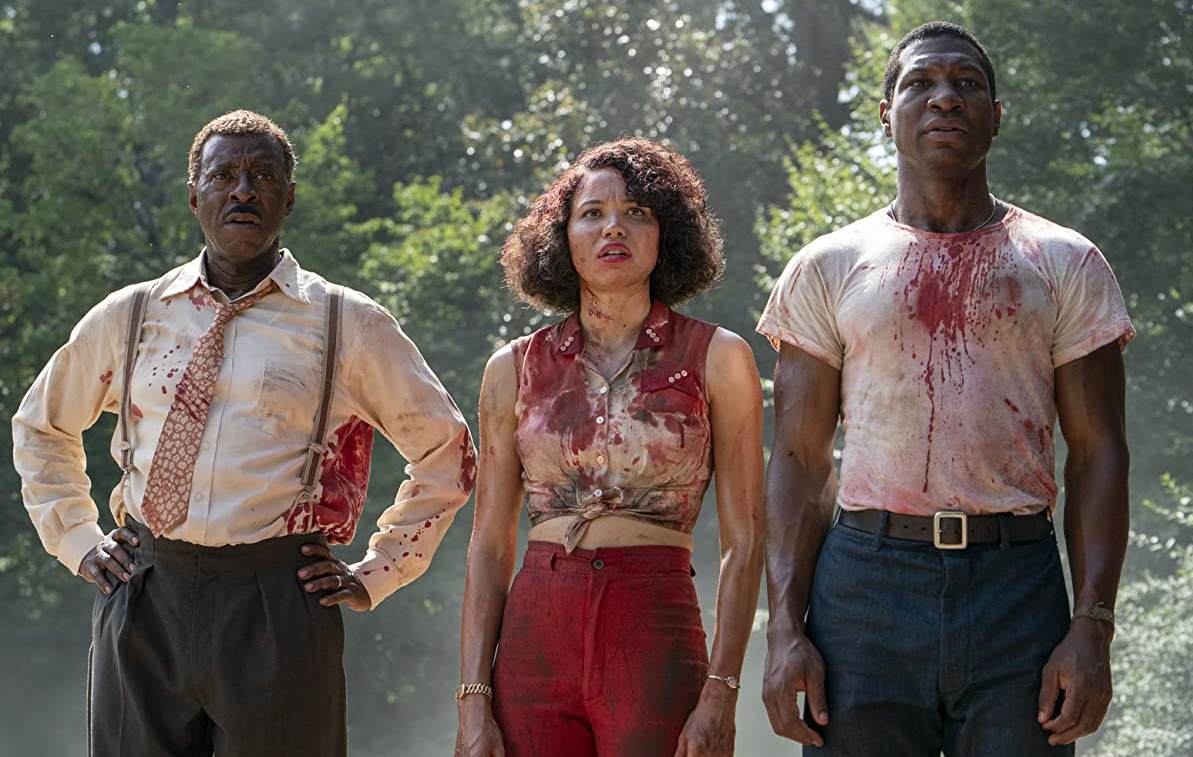 HBOMax raised our spinal hairs when they released their new horror series, Lovecraft Country, created by Misha Green and Jordan Peele and based on the unsettling and critically acclaimed 2016 novel of the same name by Matt Ruff. Co-creator and executive producer Jordan Peele (Us, Get Out) and J.J. Abrams (Star Wars: The Force Awakens, Star Trek (2009) come together here to bring Ruff’s novel to life, thus far, delivering us one of the most cinematic and thought-provoking horror series of 2020. Creating movies and shows like the Cloverfield franchise, Lost, 11.22.63 and Castle Rock, Abrams is no stranger with blending sci-fi and horror. While his career as a filmmaker may be a young one, with smash hits Get Out and Us, Peele has already etched his name in the horror genre by creating a very recognizable essence in his movies, so fans can just imagine what sort of stylistic frights we can expect from this horror series.

Lovecraft Country uses classic Lovecraft themes: pulp, dystopian fiction, supernatural horrors, vibrant colors, and the classic hubris of the all too familiar human monster. While our coverage of Color Out of Space highlighted Lovecraft’s portrayal of pulp fiction in science fiction, Lovecraft Country is a reexamination of the same subgenre but with a new caveat: racism. As a horror series, this show takes its time and presents us with an extremely healthy introduction of characters while establishing their brief but bulky backstories.

Where Misha Green covered the story of Harriette Tubman and the Underground Railroad in the 2017 series Underground, she now lends her hand in this horror series, helping tell the story of a young black man traveling across the segregated 1950s United States in search of his missing father. Green directs the first episode, “Sundown,” giving us a peek into her vision of Ruff’s Lovecraftian prose.For years, horror has identified with audience members and their ability to feel frightened, emotionally invested and, often, the genre takes us out of our comfort zone by tackling uncomfortable issues, challenging our belief systems. Though it has been touched on before, a horror series that is centered on historical racism is unique and a much needed addition to the genre; these themes have long been disregarded or have largely been portrayed with harmful stereotypes and a lack of inclusion.

Strong black writers, such as Octavia Butler (Kindred, Dawn) and Nnedi Okorafor (Who Fears Death, Lagoon), have written about the cosmos and beyond long before Lovecraft became a household name. In “Sundown,” Misha Green takes Lovecraft’s murky history with race relations in the States and presents us with a horror series that is sure to induce chills on multiple levels while bringing new light to our past and our present. Lovecraft Country seeks to open a dialogue as a horror series for fans of less contemporary works on the topic of race.

This particular Lovecraftian monster that we are being haunted by rears its head as Jim Crow in the southern United States in 1954, during the aftermath of the Korean War. It stars our titular character Atticus Finch, or “Tic,” portrayed by Jonathan Majors (DA 5 Bloodz, The Last Black Man in San Francisco), returning from active duty to search for his missing father. Tic is a regular consumer of comic books and science fiction stories written by authors like Lovecraft, and although the famous author’s racism was a very sad and confusing backdrop to the genre of science fiction, it doesn’t deter Tic from dreaming about giant alien walkers, UFOs and red space women.

The opening sequence of this horror series begins with Tic grazing a field of sand and dirt as a war rages on the horizon. This shot contains various references to books from many authors such as H.G. Wells (War of the Worlds) and Edgar Rice Burroughs (Princess of Mars). All around him, light and color gloss the landscape with a retro swath of reds greens and blues while death and carnage ensue.

Through the chaos, a single UFO descends very slowly on the battlefield, catching everyone in a daze. Everyone stops in their tracks to view the ship landing in front of Tic, who can only look up, dumbfounded. A red woman floats down and, like some strange cosmic angel, places her hand on his cheek. She mouths an unknown language that can only be assumed to be alien before the dream abruptly ends and Tic is awakened, The Princess of Mars by Edgar Rice Burroughs clutched tightly to his chest.

This opening sequence is a simple yet very powerful nod about Lovecraft’s indifference to the plight of race and race relations in the United States while also asking the question, “Can black audiences appreciate the same levels of science fiction that we do?” Can young men and women of color truly imagine themselves the main character of their own Lovecraftian journey? Tic doesn’t realize it yet, but his audacity to dream and imagine a bigger world will undoubtedly place him right in the shoes of the classic heroes he’s always dreamed about.

Though H.P. Lovecraft is renowned for classic works, such as The Call of Cthulhu and The Color Out of Space, his contributions to the social politics of his time are strained by his lack of concern for racism or his own racist acts; his cat being named N-word Man would go really far in convincing one that Lovecraft was a despicable human being, though reportedly Lovecraft was merely a child at the time. Despite this, his fiction has withstood the test of time and so has the plight of the American negro. Here we see the two mix and the results will keep you on the edge of your seat.

Tic’s immediate family includes his father, Montrose (Michael Kenneth Williams from Motherless Brooklyn and Critical Thinking), uncle George (Courtney Vance from Final Destination 5 and The Mummy), his aunt Hippolyta (Aunjanue Ellis from Ray and The Help), and his cousin, Hippolyta’s daughter, Diana (Jada Harris from The Resident and Glee) or “Dee.” While Letitia Lewis (Jurnee Smollett from Selma and Birds of Prey) is presented as the possible love interest. George is a green motorist; his job is to travel all along the southern U.S. to properly document and grade states and towns based on their affinity to black people. Included in his Green Book is a cold and eerie map of different Klan symbols and rope caricatures that dot and style the landscape. George’s work has likely saved thousands of black lives and is actually based on The Negro Motorist Greenbook by Victor Hugo Green. These guides were the godsends for many negro families looking to simply traverse the southern American landscape without impunity.

Though the central plot of the episode pertains to a letter that Montrose sent to Tic while he was in Korea, George does not believe the letter truly relates to anything, chalking the conspiracy up to drunken nonsense. George rummages through his travel guide, connecting family myths to mysterious pathways located from Chicago all the way to Boston. Their short reading session points them toward a town called Arkham, which as it turns out doesn’t exist. Arkham is actually based on the Old English word Ardham, a frequent town named in Lovecraft’s novels. The term Arkham is an homage to the classic pulp themes and dark plot twists normally present in a Lovecraftian novel, and that is where the core of the plot points really spells out the style and range of the horror series.

In history, Lovecraft Country is a fictional land frequently visited by H.P. Lovecraft. In his books, Ardham was a sister town to another that would very quickly vanish from public record, now depicted on George’s map with Klansmen donned in black robes. This is eerily similar to classic robes of the Klan that are in white and red, which point to possible elements of the occult. George and Tic decide they must journey to old Ardham, now known as Devon County, Massachusetts.

During the first act, we are introduced to nearly every major player in the series and some motives. George feels he is the hero of peace, which plays nicely into his mentorship of Tic and being a Green Motorist. Tic believes he is a hero of imagination in being a black man in what he would regard as a Lovecraftian tale.

This theme of imagination, peace and freedom is a common trope with black science fiction. That we are seeing these themes now in our nation’s popular media says much about how black cinema has evolved. Jordan Peele reins his creepy crawler chops from Us and Get Out to provide a spooky thriller that’s conscious of its cast. With Peele’s tenacious grace and Green’s tight directing, this horror series really shines in how dirty the genre can get when racism, a monster long since known by minorities, is injected in appropriate spots.

Painting Lovecraft With the Times

The journey begins with the plight of the times shown over an audio clip of James Baldwin’s 1965 speech, “The Plight of the American Negro.”

This speech was given to congress on February 12, 1965 and highlights many of the themes that Ruff was ironing out with black Americans and science fiction, albeit in more literal terms. Tic journeys to different towns and interacts with various black faces and people so that we can see the time period. Baldwin’s musings provide a sobering account of the state of the black man and woman in 1960s Chicago as we peer more into Ruff’s world and how Lovecraft, with all of his indifference, managed to still spell a world of suspense and supernatural for people of color. Because most of this episode focuses on vehement racism of the time instead of sloppily placed gore scenes, the horror—well, horror outside of racism—doesn’t appear until the final act of the episode.

What seems like a typical traffic stop morphs into a horrific night ride as the trio deal with profiling-cops and hideous beasts that prowl the ground. The production value is kicked to its max as we see these quadrupeds devour flesh and bone and terrorize the group until daybreak. The entire thing is a great bit of fun and does its job of scaring the piss out of you while maintaining a steady pace according to its context. When the sun finally does rise, it rises on a bloodied and beaten group, almost biblically delivered to a mansion in the forest. Are we finally free of terror or have we unknowingly walked into another problem?

So far, Lovecraft Country has presented itself as a dark, dystopian journey that dares to challenge H.P. Lovecraft’s racial indifference with a lovely presentation of talent with color. Jordan Peele’s particular presence opens the door for a serious examination of black horror. Though the viewer may infer that this is another history lesson for the all too tired crowd of angry Americans, it does in fact seem to have a whole universe of mystery and supernatural wonderment tucked snugly inside its coat pocket.

The debut of this horror series certainly enticed this reviewer, and it will be interesting to see what the next Lovecraft Country installment brings.