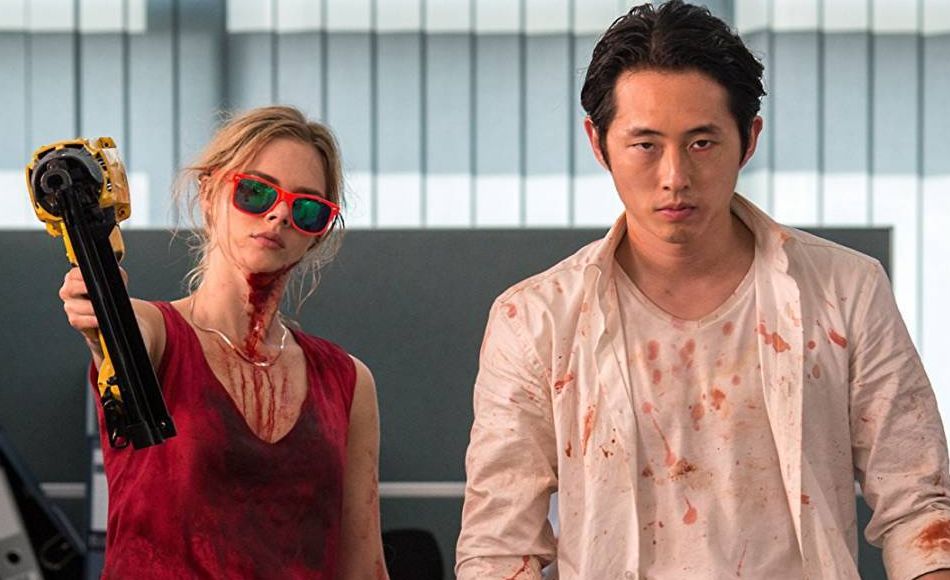 As the world feels more and more like one of George Romero’s horror movies, we have all found ourselves sequestered in our dwellings, sometimes cramped together with loved ones in such a way as to test the very notion of ‘love.’ Fear not, fellow hounds of horror, The Hub That Drips Blood is here to supply you with a Sunday movie marathon of joyful and dark horror movies for much-needed escapism, but escapism that you’ll be able to identify with, currently. So wash your hands, wear a mask, do all healthcare workers a favor by remaining in your homes and enjoy these three frightful flicks!

In the much better year of 2011, director Adam Wingard (The Guest, Blair Witch, Godzilla vs. Kong) and writer Simon Barrett (Dead Birds, V/H/S, Blair Witch) put together a home invasion film that completely flipped the script on home invasion horror movies, infusing it with comedy, family drama, twists, turns, a hefty dose of Home Alone styled slasher action and one of the best final girls to ever grace the screen. Naturally, LionsGate picked up the film and sat on it, not releasing it until 2013, at which time the home invasion genre had fizzled and The Purge released simultaneously, bringing unfair comparisons. Sad studio mishandling aside, You’re Next shot immediately into cult horror hall of fame territory.

When Crispian brings his girlfriend Erin to meet his large and complicated family for a celebration of his parent’s wedding anniversary, the horror first comes from the total dysfunction present in the affluent Davison family, tossing Erin in the midst of uncomfortable family dinners, painful passive-aggressive sniping, and then, when things couldn’t get any worse—crossbow bolts. Masked intruders, heavily armed and ready with bobby traps, descend upon the estate with only one bloody message, “You’re Next.” Unbeknownst to all, what seems like a straightforward case of home invasion is more than meets the eye, but so is Erin, herself, who may hold deadly secrets of her own.

Besides being unfettered fun, with all the dark humor and hack and slashing it can fit into its lean 94-minute runtime, You’re Next can also provide all of us a cathartic release in these stressful times. No, I don’t mean the feeling of being stuck in cramped quarters with a dangerous outside force keeping you from just running out screaming. Right now, we can all personally identify with Erin and her struggles to deal with awkward familial interactions and the total annoyance of being unable to escape these people bonded by blood and all the tiny bickering that comes with confined family. Not saying it’s good that you derive enjoyment from seeing such a dynamic getting literally skewered, but it may just help.

Starring Sharni Vinson, A.J. Bowen, Amy Seimetz, horror legend Barbara Crampton and the late Nicholas Tucci, You’re Next is one of the most entertaining horror movies of 2011 and a perfect start to this Sunday Shut-In Marathon.

Next up, for the middle of the marathon, things go a little heavier, which is appropriate given the heavy guitar riffs our leads are capable of. From writer-director Jeremy Saulnier (Blue Ruin, Hold the Dark), starring Patrick Stewart and the late-and-great Anton Yelchin, comes breakneck brutality in which no one is safe in one of the rawest horror movies of 2016.

Destitute punk band The Ain’t Rights are in desperate need of quick cash, so they decide to begrudgingly play a gig for Neo-Nazis at a compound in the midst of nowhere. Through gritted teeth, they rock the house, but before they can take their money and run, they find themselves witness to a murder and locked in the titular green room with an army of skinheads clawing at the door to remove them from the equation.

Admittedly, not the lightest of horror movies for a snack-filled marathon, as it’s the definition of without mercy, its tone visceral and filthy, causing you to grip the arm of your chair. But let’s see, piss poor management by a bunch of Nazis causing you to be trapped and isolated and unable to go out into the world? It seems appropriate now, doesn’t it?

Sometimes, and as is often the case with horror, one of the best escapes we as a society can take is through the most serious and harshest of art. We live the trauma in movies through the safe environment of our couch, releasing tension through fear, even if that fear is felt via the realistic reminder that humanity is capable of staggering ruthlessness. For that reason and so much more, Green Room makes for the perfect middle entry in our trilogy, as sometimes things are darkest just before dawn.

If Green Room left you gut-punched and wanting for lifted spirits, there’s really only one way to round out the marathon and end your evening in a blood-splattered, adrenaline-pumping punch to someone else’s face. That someone else being your boss or other higher-up authority figure. But instead of getting yourself into legal trouble, allow Joe Lynch’s (Everly, Wrong Turn 2) ball-busting satire of office politics, big business and the pent up frustrations of the daily grind do the punching for you—and the nail gunning, hammering and stabbing.

Steven Yeun (The Walking Dead, Okja) plays Derek, a bottom-rung attorney who pushes the pencils for the bigger dogs and has all but literally sacrificed his soul in the years working at Towers and Smythe Consulting. On what seemingly starts as another run-together day in corporate hell, Derek finds himself fired for a higher-up mistake and sent packing. As he desperately wants to be allowed onto the top penthouse to plead his case and save his job, the entire building is put under quarantine.

The virus known as ID-7, or “Red Eye,” has been detected and is slowly infecting every single person in the building. While not deadly outright, what ID-7 does is remove all inhibitions from the infected individual, pumping the ID up to max and removing any mental blockade that may keep you from gutting someone who cuts in line at the movies and it is now free-roaming in a building where every single person hates one another.

Derek teams up with Melanie Cross, played by the absolutely scene-stealing Samara Weaving (Ready or Not, Guns Akimbo, The Babysitter), a client Derek heartlessly dismissed earlier, to both try and survive and get some blood-fisted vengeance against the sociopathic overlords atop this economic tower of Babel. Armed with blind rage, they curse and bludgeon their way to the top, only stopping occasionally to debate the merits of Dave Matthews Band.

Mayhem is the exact type of film you want to end your night and end your marathon. Just as you’re losing energy, maybe feeling a little down from Green Room, the technicolor splatter revs up with a brilliant synth soundtrack and video game-style ridiculousness.

That, ladies and gentlemen, is The Hub That Drips Blood-approved Sunday Shut-In marathon! Exorcise your quarantine demons with these choices and run the tonal gambit. All these horror movies can be found streaming at all the usual suspects.